We have reached one of the last milestones, one of the most important ones for this little one if you ask me.

If something were to happen, this baby would at least have a fighting chance and have people fighting for him/her.

Baby is the size of: Weighs over 1lb and as much as 12″ long (think Papaya)

Total weight gain/loss: I only get myself weighed at appointments so same as last week. About 10.2lbs. I’m gaining a lot faster than with E that’s for sure.
Stretch marks? Not yet. I thought I felt and saw some but DH said it’s just a dent that coincided with some veins. I think he was right because I don’t notice it anymore.
Sleep: I’ve been sleeping better than I have in a long while, but I’m starting to not be so comfortable because it’s time for another adjustment. It’s been 2 weeks and I guess that is too long for me.
Best moment this past week: Ringing in the New Year with J. I can’t believe we will have another baby in 4 months!
Miss Anything?: I would have loved a strong drink on New Years. Mmm
Movement: This baby is going crazy! I can’t tell where s/he is or tell head from bum. S/He’s all over. I will say I feel most of the movement down low more often than not. I’m not sure if that’s because of still being a breech presentation or because I’m only 23 weeks. I guess time and my next ultrasound will tell!
Food cravings: Jalapeño poppers, Apple Pie Caramel Apple from Rocky Mountain Chocolate
Anything making you queasy or sick: I felt queasy the day after E had a stomach bug and I had to soak one of the puke buckets. But really, that would make most people feel queasy without being pregnant.
Gender: I don’t know if I’m even going to find out anymore.
Belly Button in or out? It’s gone. It’s flat.
Wedding rings on or off? Still no issues wearing them!
Happy or Moody most of the time: Happy! It was a great week! I love having J home and having quality family time with NO travelling!
Looking forward to: Meeting this little one in April! I honestly can’t believe it’s 2012 already! 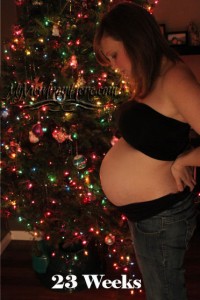